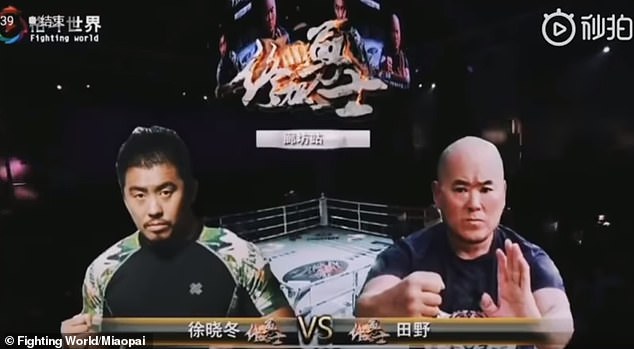 By: Green Dragon
In: News
With: 0 Comments

A Chinese kung fu practitioner who taunted an MMA fighter and dared him to a duel has been battered by his opponent during a fight that was watched by millions.

Xu, a highly controversial figure in China, has defeated two so-called kung fu experts in the past two years, sparking intense debate over the value of the traditional sport.

The match, which was branded as the ‘battle of the century’, has ignited a new round of discussion. This time, many web users express doubt about Tian’s qualification in kung fu and criticise his greed for fame.

The fight took place on Saturday in Langfang, a northern Chinese city near Beijing. It was watched by about 1,000 spectators at the scene and millions more online.

It was a much-anticipated fight as Tian had openly provoked Xu on various social media platforms for more than two years, claiming he could beat the MMA fighter and challenging him to a one-on-one game.

After the game, the two fighters engaged in a further row.

Tian, who seemed to not have showcased his kung fu skills in the match, said he had not had the chance to use his master strokes and did not consider himself the loser; while Xu said Tian deserved to be beaten as he was a scammer. 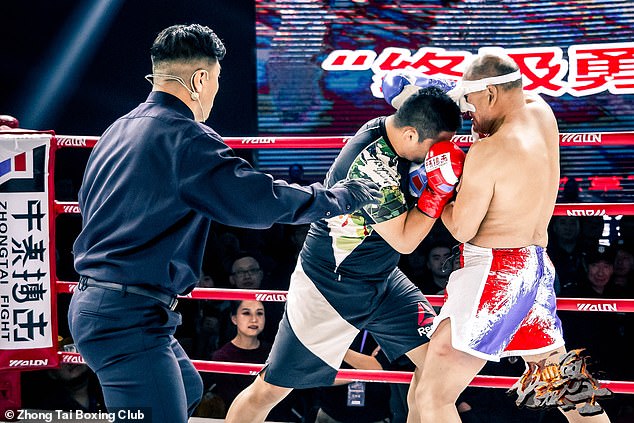 MMA fighter Xu rose to fame in 2017 after taking down Tai Chi practitioner Wei Lei in less than 10 seconds during a live game.

Tian and Xu were brought together for a face-off by a Beijing-based boxing club.

Cheng Jiasheng, the chairman of the Zhong Tai Boxing Club, told MailOnline that his company wanted to provide a ‘formal and fair’ platform for modern martial arts and traditional kung fu to compete. Cheng said online rows were not ‘elegant’ for the two popular sports.

‘The public had expected them to fight for a long time. Our company helped to build a bridge,’ Cheng added.

The game’s emcee introduced Tian as a kung fu expert who specialised in ‘iron ox elbowing’ and ‘lihe kicking’, one of the foundation kicking skills in Chinese kung fu.

‘Tian Ye wants to use his “iron ox elbowing” and “lihe kicking” to teach Xu Xiaodong the meaning of tradition,’ the emcee gushed before the game started.
At the beginning of the match, Tian rained blows on Xu’s head while Xu chose to defend himself. Around 30 seconds in, Xu hit Tian in the face and broke Tian’s nose. The kung fu fighter bled heavily and had to undergo medical treatment.

After being given a large bandage which covered his nose and most of his vision, Tian went back to the ring and carried on his attack on Xu; while Xu continued to defend.

Xu claimed after the match that he had been told not to punch Tian’s face, kick his head or throw him on the ground by the organiser so the fight – livestreamed online at the price of 8.80 yuan (£1) per watch – could last longer.

The game was designed to have three rounds. It ended half way into the second round when Xu knocked out Tian with a kick in the lower body.
The match has been called ‘ridiculous’ and ‘laughable’ by web users and media. They say the organiser knew well that Mr Tian would lose but still arranged the game and furthermore, sensationalised it.

Tian is a former welder and a self-proclaimed kung fu expert. He claims to have practised kung fu since childhood and excels in kicking. He reportedly went to sharpen his kung fu skills in Shaolin Temple before the fight with Xu.

Various reports suggest that Tian was promised a large sum of money by a mysterious businessman for attending the game. The rumour goes that he would receive 30 million yuan (£3.48 million) if he wins and three million (£348,000) even if he loses.

Speaking to iFeng Weekly after the game, Tian confirmed the rumour but said he had not been paid. He said he did not regret fighting Xu, adding that he did not have the opportunity to use his master strokes and did not consider himself the loser.

In an article posted on social media, Xu said after the game that he fought Tian because he was a scammer and deserved to be exposed.

The organiser said Tian sustained a nose fracture and muscle tears on the legs. He has been treated and is recovering well.