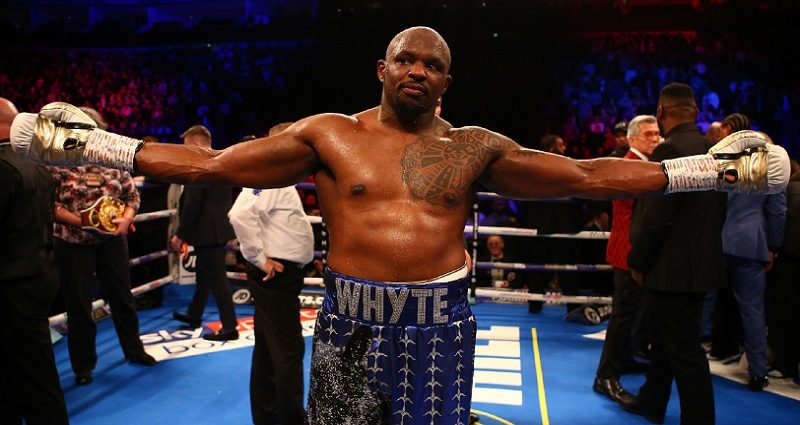 By: Green Dragon
In: News
With: 0 Comments

Once upon a time ago, Dillian Whyte was making his way through the kickboxing ranks before embarking as a pugilist.

The 30 year-old current World Boxing Council number one was also a Mixed Martial Artist briefly in his younger days.

Becoming a British and European K1 champion, and having one solitary loss in MMA, Whyte turned to boxing in 2009.

Defeating Anthony Joshua during those days, Whyte eventually entered the professional ranks in 2011.

The rest, as they say, is history…

But going back to the footage, Whyte displayed the brawling technique he still fights with today. Always up for a scrap, Whyte has shared two wars with Derek Chisora, along with others against Robert Helenius and Joseph Parker.

Punching Will Riva to the canvas before roughing him up and taking him out, Whyte conquered the UK before the Continent.

WILDER
Boxing was always going to be his mission, though. And Whyte currently stands on the cusp of a world title fight.

Working his way to the top of the ratings with the WBC, Whyte is in line for a fight with Deontay Wilder in the near future.

Wilder has been linked to signing with DAZN, meaning Whyte could share a ring with the American in 2019.

Mandatory challenger Dominic Breazeale is set to be first, according to a ruling, whilst Whyte could conceivably be next in line.

Promoter Eddie Hearn had already offered Wilder the opportunity to fight Whyte before Anthony Joshua. Inadvertently, Hearn could get his wish if Wilder signs on the dotted line for a two-fight deal.

The repercussions of this can be huge for Whyte. Even if the WBC force Wilder to battle Breazeale, Whyte would almost certainly be next.

‘The Bronze Bomber’ has a free outing later in 2019. A voluntary choice which barring an unfathomable event, has to feature Whyte in the opposite corner.

Whoever comes out on top is the line set to face Anthony Joshua in the first half of 2020.

This scenario can only happen if Whyte resists a bid from Top Rank and Frank Warren.